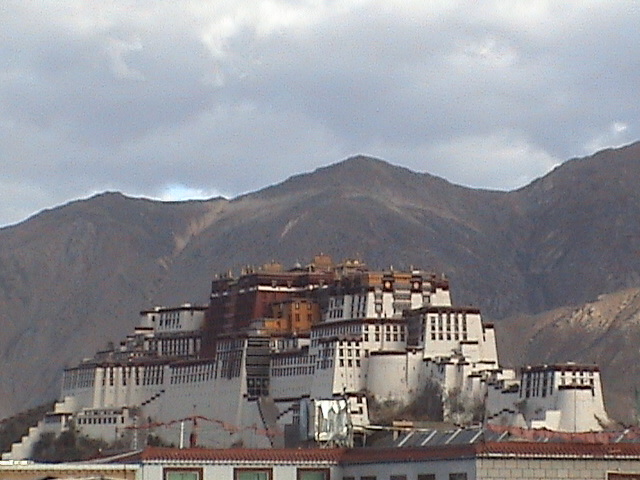 Tibet, the roof of the world, the landscape of Lobsang Rampa, has been a dream destination for many people. Since the opening of the Qinghai-Tibet railway in 2006, the train has been the preferred way to enter or leave Lhasa.

The summer of 2009 found me the third time in Chengdu trying to get a Tibet visa — yes, a China visa is not enough. That required 5 working days. The previous time my APEC visa was not accepted, and the first time I didn’t have the extra 5 days.

8 pm found me looking for the entrance to the North Chengdu station. No this was not the entrance for the Tibet train. There was another entrance somewhere to the right of the main building. Our passports, China visa and Tiber visa were checked by stern looking guards in green uniform.

We were crammed into a makeshift waiting room.

When the whistle blew, a sea of humanity and luggage surged towards the carriages. In seconds the platform was clear for us to amble to the less densely populated hard and soft sleepers. The bunks lie cross-wise, 3 levels on each side of a cabin for hard sleepers and 4 for the soft class. There was some confusion how the bunks were numbered so we have to shift around.

The journey was memorable first because of the scenery.

I found myself in the company of a retired couple from Harbin, a retired lady with a passion for photography from near Guilin, a young Sichuanese man returning to Lhasa to work as a chef, and a female university student going to Lanzhou. I was happy with my middle berth as it wasn’t too high to climb and none of the other passengers was going to sit on my bedding.

I settled down to sleep as the countryside rolled by. Two provinces later I awoke to see the barren landscape of Gansu and my cabin mates busy slurping their ‘convenience’ noodles. On the way to the buffet car I witnessed a queue to marry the light cup noodles with the steaming hot water that issued from a faucet in every carriage.

My own breakfast was a decent RMB 25 combination of rice and simple vegetable dishes, no jam and toast. The same countryside rolled by and somebody said we crossed the Yellow River but I could only see small rivers.

In between meals, the Chinese citizens brought out their local delicacies. The Sichuanese brought out some meats to share and I tried not to feel embarrassed because I didn’t have anything food to share. Another time the Guilin lady brought out sweetened chestnuts. I learnt that these were not individual fruits as I always thought but 3 or 4 chestnuts formed one hairy fruit and the Guilin-Liuzhou area was famous for it.

Every meal the Chinese citizens ate ‘convenience noodles’. I don’t know whether it was the same flavor but they seemed to relish them.

Soon it was a new night. We were informed that the oxygen was flowing. The next morning the windows were frosted and we could feel the cold seep through. Through the mist we could see Lake Qinghai, a watery body only a couple of km away. We could feel that it was very big as it took several tens of minutes to pass it.

Some more barren landscape and suddenly we were in the Lhasa railway station. We were not allowed to look around but were quickly ushered out and handed to the local guide.

financial independence | why, how, when

Knowledge to power you to findependence and a really good life. No bull, we sell nothing.